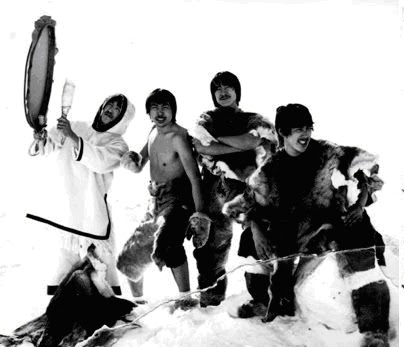 "Hailing from the 69th_Ç parallel in the Arctic is a story unlike any other. _Ç Born on the land to Nomadic parents and later settled in the hamlet community of Igloolik, these childhood friends grew up learning to play on toy instruments until becoming accomplished musicians and forming a group in 1977._Ç Their talent won success in the early 80s with contests, press coverage, and tours of isolated Northern communities until in 85 when CBC Radio invited them to travel 3000 km south to record an album._Ç The result became the first Canadian Inuit Rock/Metal album ever made and first Indigenous language rock album in North America._Ç Pressed in a tiny quantity of 500 copies for promotional use only, the LP quickly disappeared into the vortex of rare Canadiana._Ç Over the 1990_¢‚Ǩ‚Ѣs and into the millennium, Northern Haze_Ç endured great hardship yet 35+ years on they still prevail._Ç In 2010, a new recording and a documentary film on the history of the group was produced on location in the Arctic._Ç Complete with traditional _¢‚Ǩ_ìayaya_¢‚Ǩ¬ù parts and sung entirely in Inuktitut, the end result is a heavy melodic rock/metal_Ç album played by veterans of the genre with_Ç a distinctly original character unlike anything heard before._Ç For these_Ç men who live two lives, the old ways of the past meet with those of the present; _¢‚Ǩ_ìSinnaktuq_¢‚Ǩ¬ù (their _¢‚Ǩ_ìdreams_¢‚Ǩ¬ù) are truly embodied within the realization of this amazing deluxe collection of original material.\r\n11 songs total: seven songs recorded 1985, one song_Ç recorded 2002, and three songs recorded 2010, ranging from tight and heavy NWOBHM to heavy melodic doom-rock!_Ç Exclusive CBC license, 100% authorized, remastered, original cover art painstakingly restored, 12 page booklet packed with vintage photographs +_Ç art_Ç + detailed history. _Ç The true Rock Shamans of the North!_Ç "Northern Haze were a rock and roll band with all band members born and raised in Igloolik, Nunavit. The band members were: Kolitalik Inukshuk on lead guitar; James Unalaq on electric rhythm guitar; Elijah Kunnuk on bass; John Inooya on drume; Ed Bimm on synthesizer; and Randall Prescott on harmonica. Randall Prescott was Musical Direction; Marc Lajoie Engineer; produced by Les McLaughlin. This music artifact is of cultural and historical significance. The group were the first Inuit group to record a rock and roll album." - Supreme Echo.

\r\n"The album was recorded at Marc Productions in Ottawa in March, 1985. The great cover artwork was by NORTHERN HAZE. The photography was by John Ough. \r\nThe musicianship is tight; these young lads could really tear it up. Theres great guitar riffs, fuzz guitar, and a garage feel. The blend of inuit culture and rock is entirely distinct - this is a completely unique recording that could never be duplicated. Due to its quality and rarity, this album remains on the wishlists of many a collector worldwide." -Museum of Canadian Music.

\r\n"Over 4000 years ago, when the first Inuit moved from place to place in the Arctic Regions, the drums and the haunting chants of the voice were the sole means of entertainment. These songs were also used to pass information from the old to the new generation. Ayi Ayi songs told stories of the past, and contained hope for the future. The drum and the voice! Today, music is an important part of the Inuit culture. "NORTHERN HAZE", a group of young men, all born and raised in Igloolik, carry on this way. But they have added the rhythms of modern rock music to the drums and voice of the past. Lead singer and guitarist Kolitalik Inukshuk with bass player and backup vocalist Elijah Kunnuk, drummer John Inooya and guitarist James Unalaq blend the music of today with the thoughts of yesterday and the hopes for the future in this first album to feature Inuktitut Rock and Roll. The songs speak of the way of life of the older generation as in Inusivut, and of present day relationships as in Anuvunga. The group "NORTHERN HAZE" hopes this recording will please the older generation as well as show young Inuit that modern sounds are an important part of the future of Inuit music." -Robert Williston/liner notes. Edition of 657.