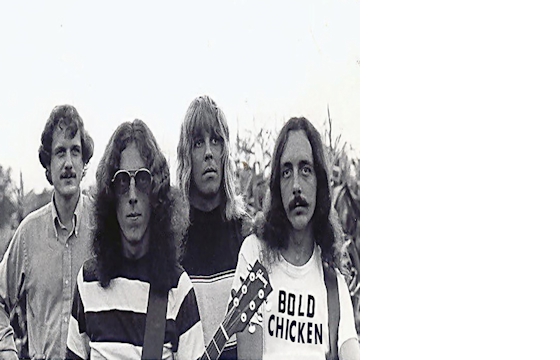 "For the first time anywhere on vinyl, Lysergic Sounds Distributors proudly presents Bold Chicken. Formed in 1970 in Akron, Ohio by future Rubber City Rebels leader, Buzz Clic, the band began gigging around north east Ohio playing the standard cover band repertoire, but snuck their own crude original tunes amongst the usual top 40 fodder, which must have truly bummed out the rust belt bar denizens looking for a good time, swaying and singing along to Smoke on the Water. Bold Chicken went into the studios in 1972 and recorded an ultra-crude demo of four depraved songs which LSD presents on this 7" disc that deals exclusively with the seedier side of fornication, including the misunderstood homosexual in A Fellows Lament, the teenage sexual frustration of not sealing the deal in Gears and Tears, an amorous ode to a lady of the night in Streekwalkin Queen, and ending the set up with a song about contracting VD (natch!) titled Oh Doctor Please. The tunes have a sound that Todd Killings of Victim of Time described as a top-notch find in the vastly unpopular world of Midwest bad glam-punk in a pre-Ramones America. Not as art-bent as Debris and not as straightjacket-worthy as the nearby Electric Eels, this is more a quality studio recording of a "far-out" drunken quaalude party, (complete with obviously fake, limp-wristed backup vocals) that you werent supposed to know about. It can definitely stand on its own with anyone else hitting their stride in 72, as its heavy, but not metal, crazed, but not psychedelic, punk but not prog, and even dumber than the Stooges. This is a limited fully licensed hand numbered edition of 350 directly mastered from the original tapes." - Lysergic Sound Distributors.