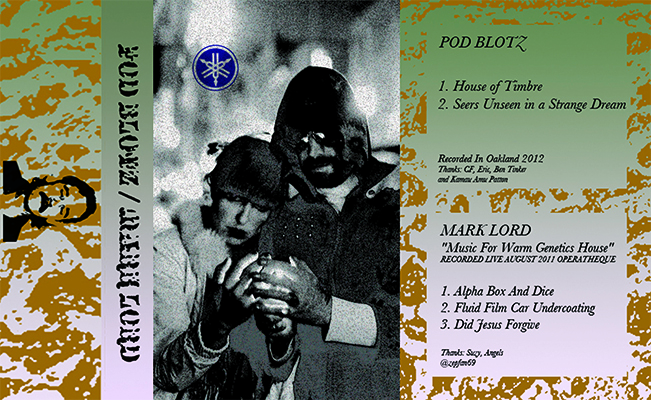 "Experimental artist Suzy Poling birthed Pod Blotz in 2002. Polings sound is an interesting cauldron of tape manipulation, organ drones, melodies, electo-acoustic sounds, synthesizers and voice. Pod Blotz is a solo project that is derived from conceptual artistic endeavors and sonic explorations relating to Science Fiction, phenomenon and material reactions. She is interested in the regeneration within materials and sound. She works with photography, video, film, broken glass, multidimensional lenses, chemistry and sound to celebrate and elaborate the phenomenon and permanence. Suzy is based in Oakland and represented by the Zg Gallery in Chicago. Mark Lord is the solo moniker of artist Christopher Forgues. Forgues goes by C.F. in the art world. His graphic novel series, Powr Mastrs, is published by the Grammy Award winning Picturebox, Inc. His story "Mosfet Warlock and the Mechlin Men" was included in The Best American Comics 2009 edited by Charles Burns. Since May 2011, he has published a monthly comic strip "Monorail High" in Mothers News, a monthly newspaper in Providence, RI. His work has been included in the Kramers Ergot anthology series and the French graphic zine Nazi Knife." - Scumbag Relations.