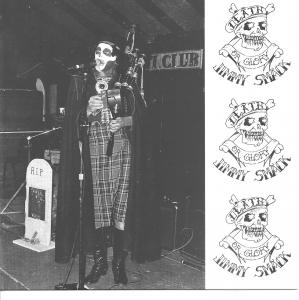 "We at Death Vault were pretty excited to release Jimmy Smacks -¢‚Ǩ-ìDeath Rocks-¢‚Ǩ¬ù 45 last year, but given the reception that received, were even more thrilled to now reissue the debut single. Titled -¢‚Ǩ-ìDeath Or Glory-¢‚Ǩ¬ù, this impossibly obscure sla...b was originally self-released on Jimmys own Star Theatre Productions imprint in 1982, its tiny pressing disappearing instantly and the name surviving on want lists alone. Over thirty years later, our deluxe reissue is mastered direct from the master tape and now comes in a picture sleeve with never-before-seen Ed Colver photographs. Including five tracks of grim, aggressive electro-punk, this pressing is limited to 110 on red and 220 on black vinyl. Mandatory stuff for those who know, so move fast or cry later!" - Death Vault. Black vinyl version.